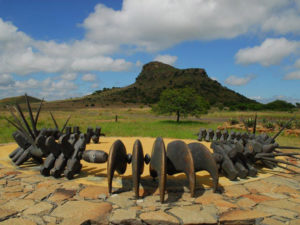 A casualty rate of 10% of forces engaged in battle is today considered as catastrophic.

British casualties at Isandlwana number some 70%, which constitutes annihilation. Zulu numbers have always been exaggerated, but current thinking is approximately 3000 dead out of an attacking force of about 20000, which works out at more than 10%.

So the battle may also be considered catastrophic for the Zulus, although they did come away with the entire contents of the camp, which was their ultimate objective.

Zulu King Zwelithini has asked on a number of occasions why the names of the Zulu dead are not recorded somewhere? Simply because they had no written records at that time, and thus the names have sadly blown away into the winds of history.

In 1999 a monument to the Zulu dead was erected at Isandlwana to coincide with the 120th Anniversary of the battle. It consists of a gigantic representation of a warrior’s necklace or isiQu, the Zulu equivalent of a campaign medal.

A “been there, got the T shirt” award, NOT the so-called “Zulu VC” so beloved by some historians.

Traditionally the necklace is either made by cutting up one’s walking stick and stringing the blocks together or else specifically from imsimbithi wood (Natal Olive).

The necklace is shaped in the bull’s horn formation, pointing towards the hill where the warriors died. Around the base are a number of sleeping pillows or iziqiki, symbolizing that the warriors are “sleeping”, and this is thus a monument to the dead warriors.

Unfortunately, it failed to hit its mark.

The iziqiki are not correct – they are of a West African pattern.

Secondly, the Zulus traditionally don’t do monuments – they are extremely difficult to lug around in their constant search of fresh grazing and water for their flocks.

When a European points out the number of statues to, say, Nelson Mandela, all over the world, the Zulus point out that they didn’t put them up! You Europeans did!

Oops – an age old mistake made in Africa! Sometimes we should actually ASK the intended recipients what they want, rather than assume that they want what WE think they want.

Thus, at Isandlwana and Rorke’s Drift there are now two monuments to the Zulus, one which WE think the Zulus should have and one that THEY think they should have.

Their monument is charmingly simple – a tree. Ziziphus Mucronata to be precise, more commonly called the Buffalo Thorn, or Umpafa or Lathlamkhosi.

Their reasoning is simple.

I simply cannot fault their logic. Perhaps we can learn something from them?